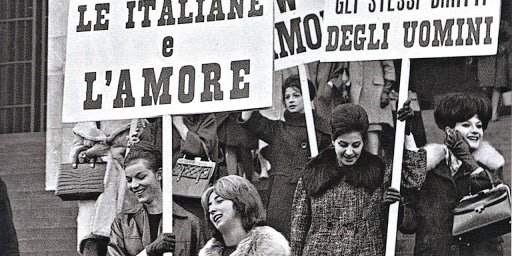 English
Author(s)
Summary
This is the story of how the divorce law was issued by women in Italy during the Seventies.
A short fragment of the story

I think that Italy is one of the last countries, in the old Europe, where the law on divorce has been issued. I can say that it was a real party strife between left and right; also Vatican State with its power and its influence on Italian political life conditioned the issue of this law. Finally, after five years of debate, on 1st December 1970, the divorce law was issued! Loris Fortuna, a deputy of socialist party, was lucky with the Parliament (..in fact Fortuna means “luck” in Italian…). There were 325 favourable votes and 285 contrary votes. The day after „The Times‟ commented: “ Italy divorces and marries its century!”. But the debate wasn‟t finished. In January 1971, the right (..and behind it the long black shadow of Vatican..) presents to Parliament the request for the referendum to repeal the law on divorce. At that time I was fifteen and I supported divorce only because it was a way to contest the family, the society, the church and power in general! Four years later, the abrogative referendum was fixed, and on 12th May 1974, Italian citizens were called to express their opinion. In 1974 I was eighteen but, according to the law of that time I was under age, so I couldn‟t vote. (Before 1975 people could vote at 21 years old). However, I was very interested in that event, much more than four years before. I remember that everywhere and everyday there where many discussions about the referendum: in offices, in schools, in the streets and obviously in every family…also in mine. I knew that my father was contrary to divorce, he said that it was a damage for families…a ruin for children. I was, and I am sure of his vote, sure of his „yes‟ signed on his voting-paper (it was an abrogative referendum, so if you were contrary you had to sign yes) My mother….she never told me her choice. When I asked her about her vote, she answered: ”the vote is secret!”. She has never said anything about it, but I‟ve always noticed her smile when we spoke about divorce! It was clear for me and I‟m sure, she was favourable to it. Although she had a good marriage and she loved her husband, she was favourable, because in the Seventies women changed the social rules much more than men. Whatever my mother‟s vote was, the result was to mantain the law: 59,1% for and 40,9% against. In some parties of right , they tore their hair and the church launched anathemas and excommunications to all Christians that would have used it, but people didn‟t worry too much: they preferred to face the Christian hell rather than domestic hell! This law signed a historical turning-point in Italian society. ..And my mother?.. Unfortunately she died in 1985 and she never declared her secret vote; but I‟m sure of her „no abrogation of divorce‟ and now I can say „thanks mum for your vote‟, because many years later it has also been useful to me.

Read the story
Countries
Why this story is important
This story is important because it tells about social activism and how people, especially women, fight for their rights.
How this story was created
This story is part of the stories selected as finalists for the “Telling Europe!” Award, created within the “European Memories” project, Grundtvig Multilateral Project – 2008 – 344 / 001-001, created by UNIEDA-Italian Union of Education of Adults (coordinator), ADN – Fondazione Diaristico Nazionale-Onlus, European Information Center (BG), Danish School of Education, University of Arhus (DK), Community Development Foundation (ES), SL- sozial.label eV (DE), VIDA – Association for Intergenerational Enhancement and Active Development (PT).
It is an autobiographical narrative.