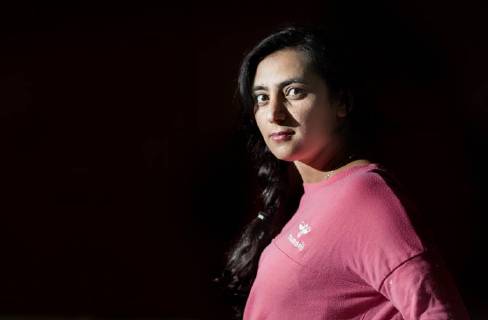 Khalida Popal is the former captain of the Afghanistan women’s national soccer team. Sport has been for Khalida, since her childhood, a way to defend women’s rights. She discovered a passion for football as a child, playing with her brothers. As she grows up, she discovers that girls are no longer allowed to play, women are relegated to certain roles, their place is the home, being submissive to men. But Khalidda doesn’t give up. She continues to play secretly, involving her companions. Their goal was not to learn football techniques, but to feel free. The attacks and threats are not enough to stop them. Her tenacity, years later, produced her fruits. The Afghan women’s national football team is finally created, of which Khalida becomes captain. More and more women are starting to play football, they become thousands. In 2021, however, she must flee Afghanistan, because her life is in danger, as an activist. She takes refuge in Denmark, a guest of various reception centers. Once again football comes as salvation, salvation from the depression into which – as a refugee, deprived of her past and future – she had slipped. Through sport, Khalida helps other women, and herself. Later she founded, also in Denmark, the Girl Power organization, which works through sport for the rights of women and minorities.

The return of the Taliban to Afghanistan is a nightmare that becomes reality. Khalida invites her former companions who have remained in the country to burn their uniforms, erase all traces of their past as players. She manages to get more than three hundred athletes, female judges, activists to flee from Afghanistan. Her message is to act for change, in our places of life, in our communities, to fight against discrimination and inequalities.

What can we learn from this story?

This story teaches us that creating change is possible, that individuals, or small groups, can make a difference.

Teach us the power of sport to overcome cultural barriers, which is revolutionary if we think about what competitive sport has become today.

Khalida’s tenacity teaches us in a powerful way, to persist, to continue to fight despite adversity.